What do you do when faced with an action that violates your moral code?

Check your moral compass?
Consult your religious tradition?
A soldier doesn’t get to decide.

THE RESULT IS
MORAL INJURY.

Dick Hattan, a veteran of the Vietnam War takes a look at his soul forty years after the war ended. Now attempting to make sense of his life, he discovers the moral injury he sustained, the wounding of his soul when he acted against his own moral code. Learn of his journey from his Catholic upbringing on the southwest side of Chicago to his tour of duty as a soldier in Vietnam. Discover the attempts he has made to find peace and healing for his fragmented soul in his new book, Invisible Scars of War — A Veteran’s Struggle with Moral Injury. 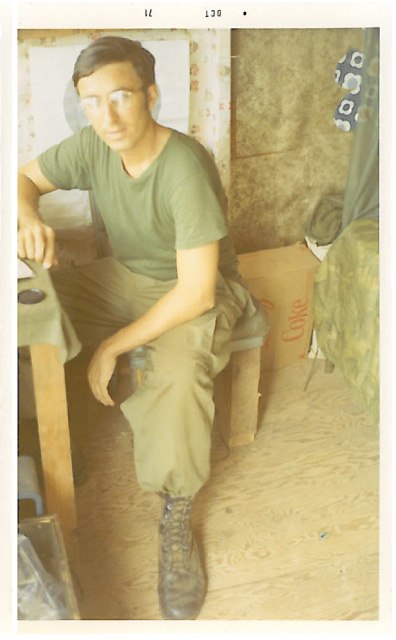 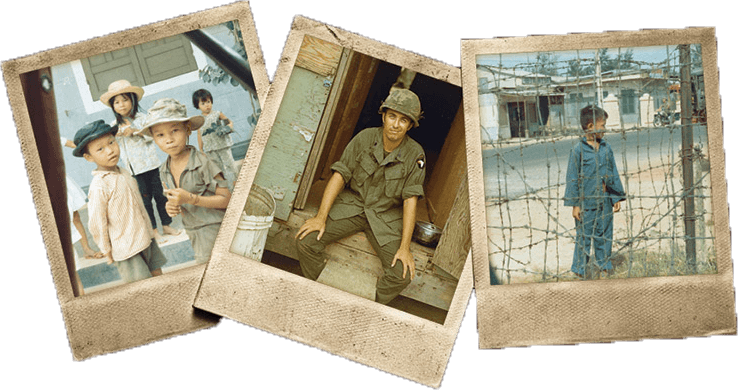 Dick Hattan is a native of Chicago. He served in the U.S. Army in Vietnam during 1971 with the 101st Airborne Division. He earned a Master of Management degree from Northwestern University in 1974 and began a 44 year career as a health care executive. In 2012, he earned a Master of Divinity degree at Chicago Theological Seminary and was ordained a priest in the Independent Catholic Church in September of 2015. His ministry work includes a weekly Eucharist at a rehab center in North Aurora, a writer’s group for veterans and a house church. He also preaches monthly at Hearthstone Communities where he works as a fund raising executive. 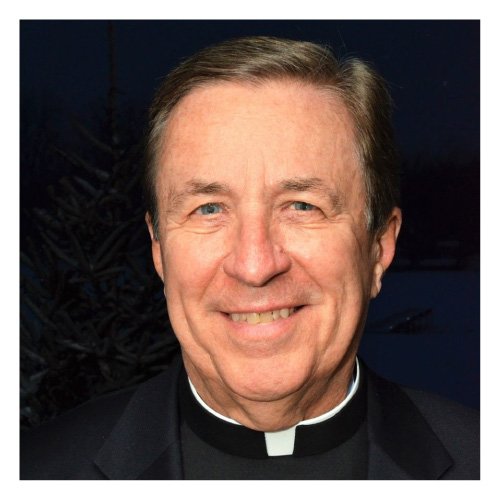 WHAT PEOPLE ARE SAYING

“This book is an important contribution to understanding the Vietnam War and moral injury.”

“It is a treasure trove of information about daily life in the garrison areas in Vietnam that are totally ignored in the literature.”

“Anyone who reads your memoir will be impacted by it and find a facet of their own lives or that of a friend or family member in your experiences.”

“In a moving and thoughtful debut, Hattan, a priest in the Independent Catholic Church, analyzes the cultural cost of the Vietnam War while reflecting on the spiritual damage one suffers in war. Hattan, a native of Chicago, examines his powerful emotional crisis of faith and morality when he served with the 101st Airborne Division in Vietnam in 1971 at age 24. Describing himself as “a young white Catholic boy,” he had long been drawn to the church and, during the war, felt torn between following the “nonviolent Jesus I read about in the Gospels” and acting on his love of country. Hattan ponders what he believes to be the church’s inconsistent teachings—“If all life is sacred, why did the Church go to the mat on abortion, but not on war?”—and charges the church with having failed to support those returning home from tours of duty. With no welcome home parade or acceptance, Hattan describes how veterans suffered moral and literal injuries, and suggests that a National Day of Forgiveness could serve as a kind of spiritual healing. With candor and insight, Hattan offers options to those who seek inner peace from war’s personal demons.”

“As a young man, author Dick Hattan went to war in Vietnam. Forty years later, he investigates the roots of survival, moral beliefs, and his actions inInvisible Scars of War: A Veteran’s Struggle with Moral Injury, a memoir not just about his tour of duty, but war’s underlying challenge to his moral belief system.

Plenty of other memoirs cover Vietnam experiences, but few approach the subject from a moral values perspective. The challenges Dick Hattan faced were as much about testing these values as they were about physical survival. Invisible Scars of War thus documents an important struggle that too many Vietnam discussions leave out, identifying the effects and presence of moral injuries.

As Hattan considers other writings and teachings about morality, he weaves these into his memoir and self-examination: “I feel dishonest, playing both sides, unable to reconcile the two positions. What complicates this is the morality that wraps itself around participating in war and about war itself. I studied war and consulted contemporary theologians like Stanley Hauerwaus and Walter Wink who influenced my thinking on nonviolence and “just war.” Their writings expanded my thoughts, challenging long-held belief systems that formed me as a young man. Instead of providing clarity, I felt more conflicted as I tried to reconcile these new thoughts with the role that religion had played in my life, guiding my moral compass, showing me the path to truth.”

Hattan “stepped forward and was a soldier,” but fought an internal battle just as fierce and damaging as his physical confrontations in Vietnam. These are chronicled in chapters that move from childhood to his term of service and beyond, considering the evolution of his moral belief system and how it was changed forever.

Hattan, like many soldiers, came to believe that God was AWOL in Vietnam. He struggled daily with being thrust into a combat role out of his control, and he found his moral upbringing more than challenged by being a soldier asked to both commit atrocities and ignore or accept what he saw around him. He doesn’t worry about being killed. He worries about killing. And he worries about breaking his Catholic vows on the battlefields of heart and soul.

His thoughts, prayers, and insights make for an exceptionally powerful memoir in which he survives on many levels, but requires much healing upon return. His wounds are not physical or visible, but just as deadly.

Any veteran of any war (and those who love or work with them) will find Hattan’s account of his survival and moral evolution compellingly different from other Vietnam memoirs. It’s filled with insights on how a man with a strong moral upbringing finds his way home at last.”

is a writer's workshop for veterans and family members where participants are encouraged to tell their story. The group has met monthly for the past 7 years welcoming veterans from World War II to the current war in Afghanistan. Military experiences are addressed along with everyday life scenarios in a non-threatening, safe environment. Previous writing experience is not necessary.

We meet at the TLS Veterans office in McHenry, Illinois on the 4th Thursday of each month. We’d love to see you there. Contact Dick for more information.
Contact Dick

INVITE ME TO SPEAK

Looking for a speaker for your club or meeting on a contemporary topic? I can provide insight into moral injury, a condition that afflicts veterans often many years after active duty.

I'd love to speak to your group! 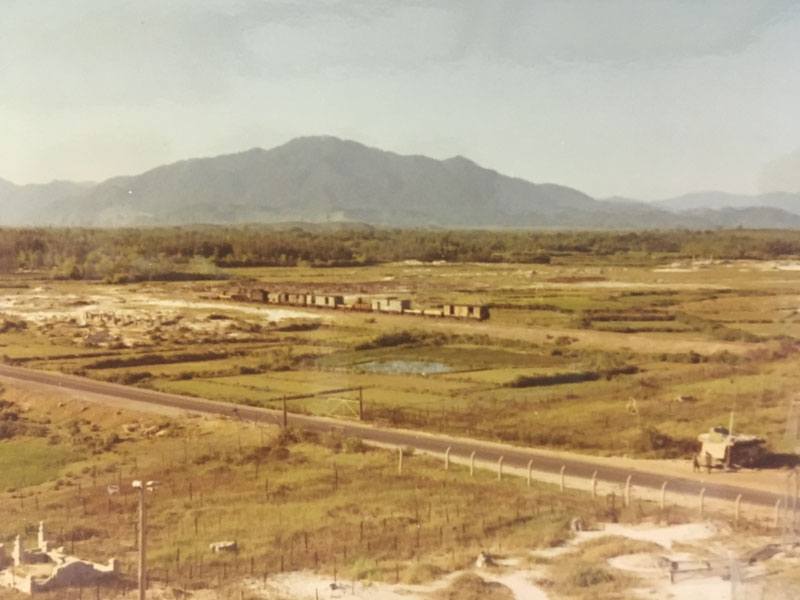 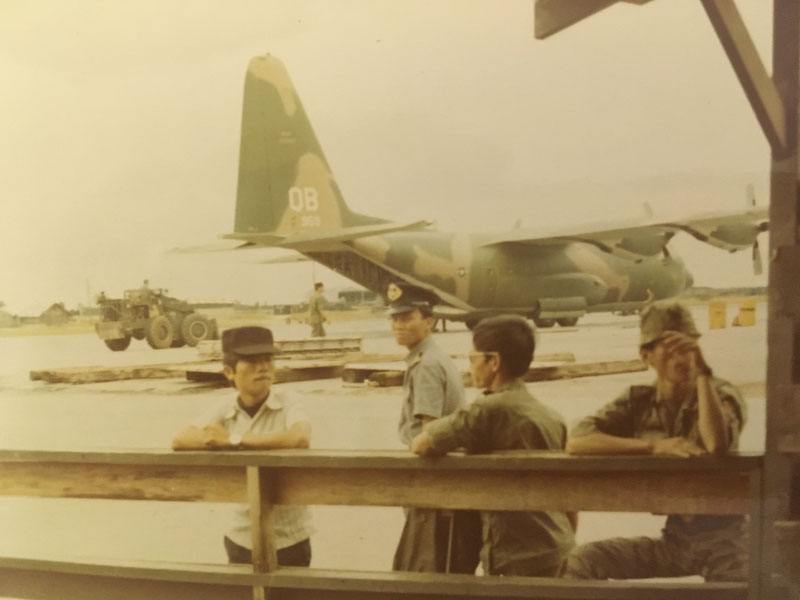 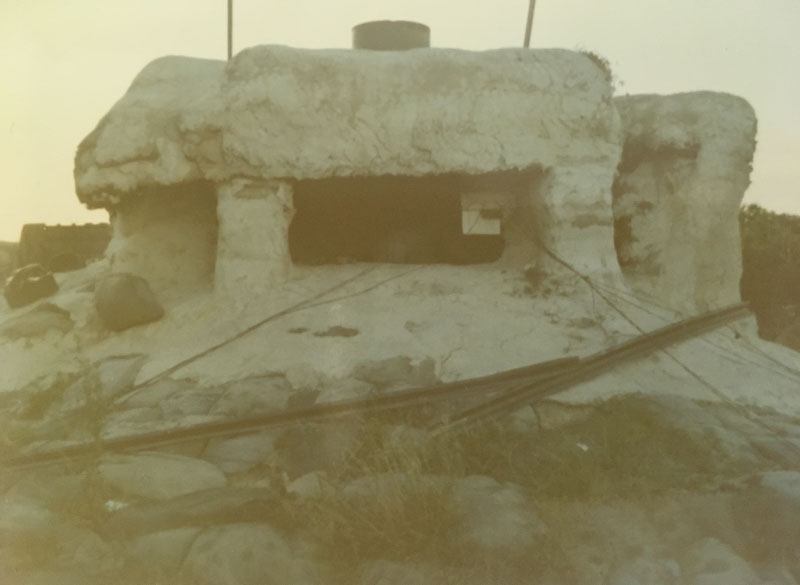 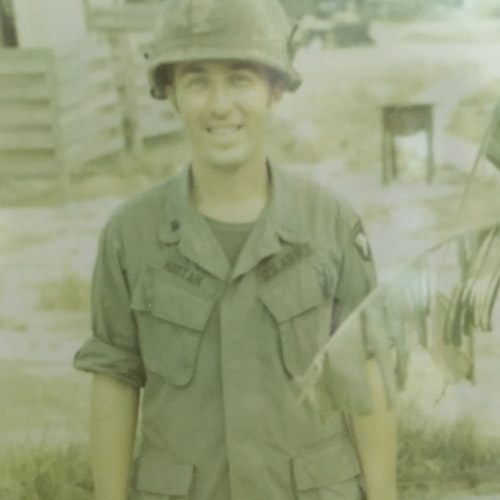 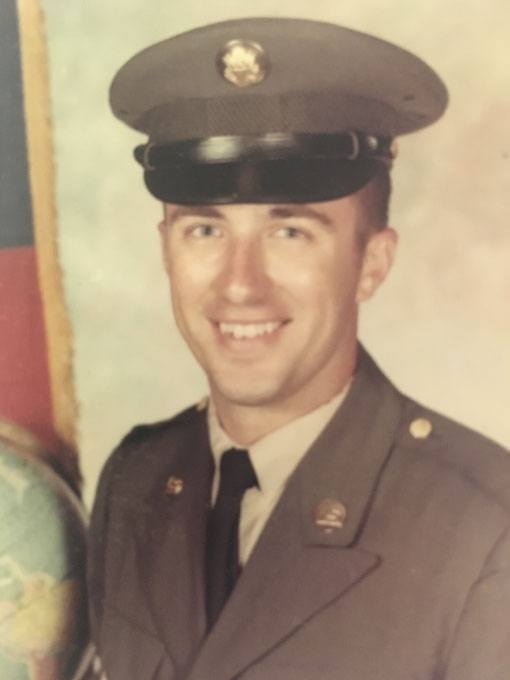 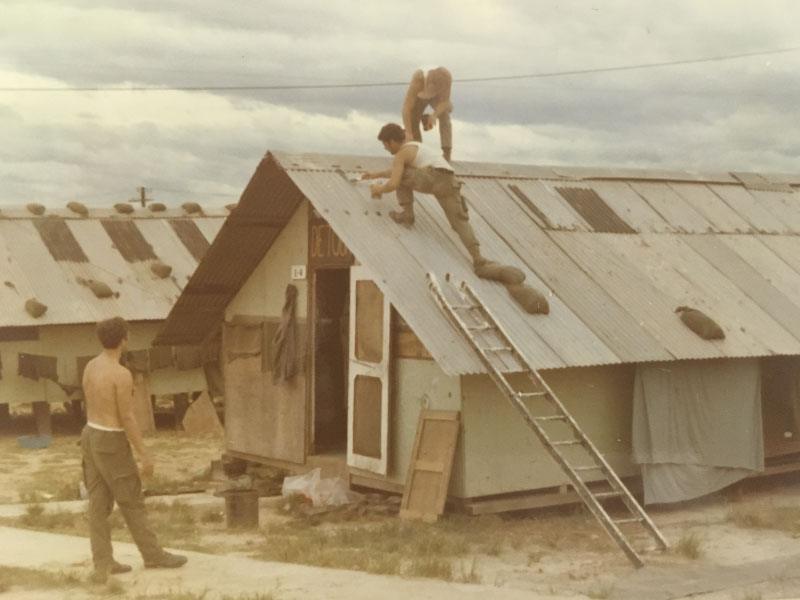 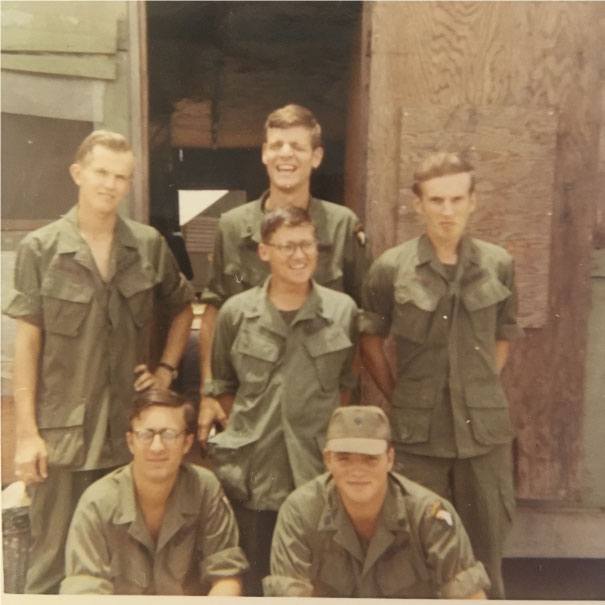 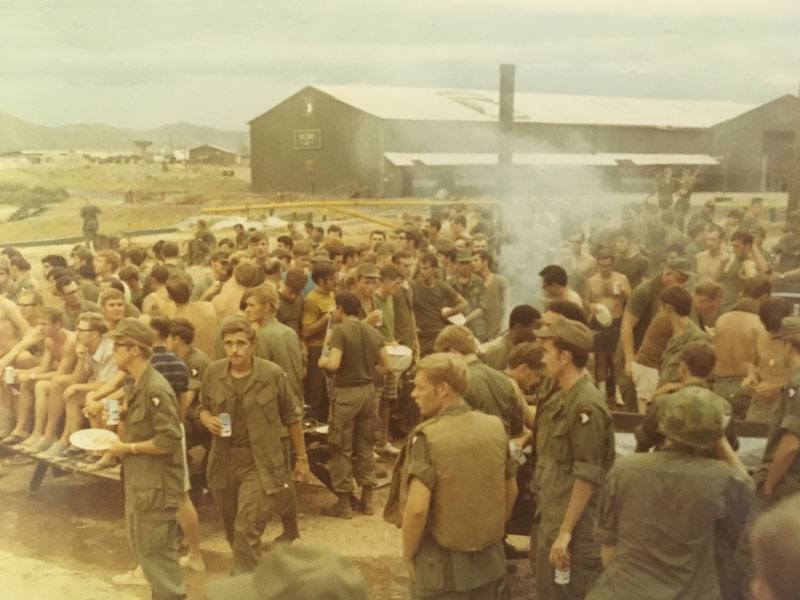 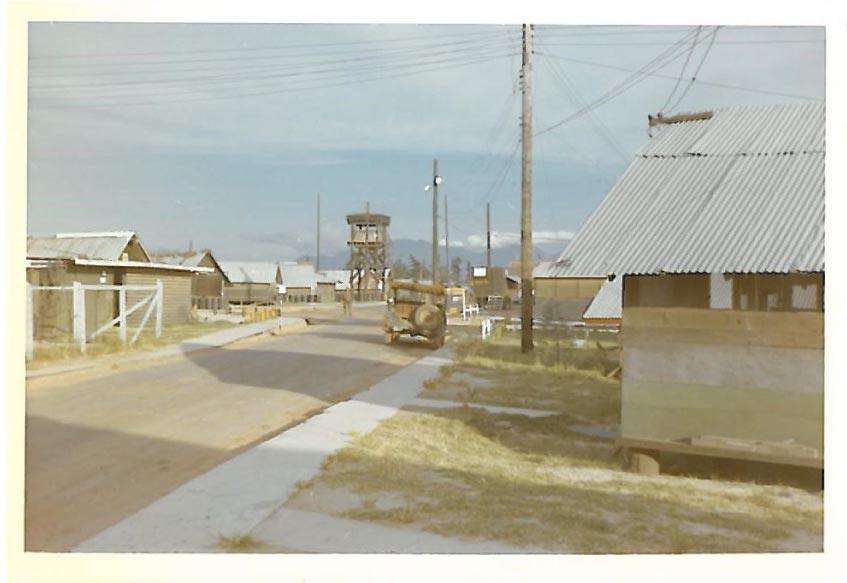 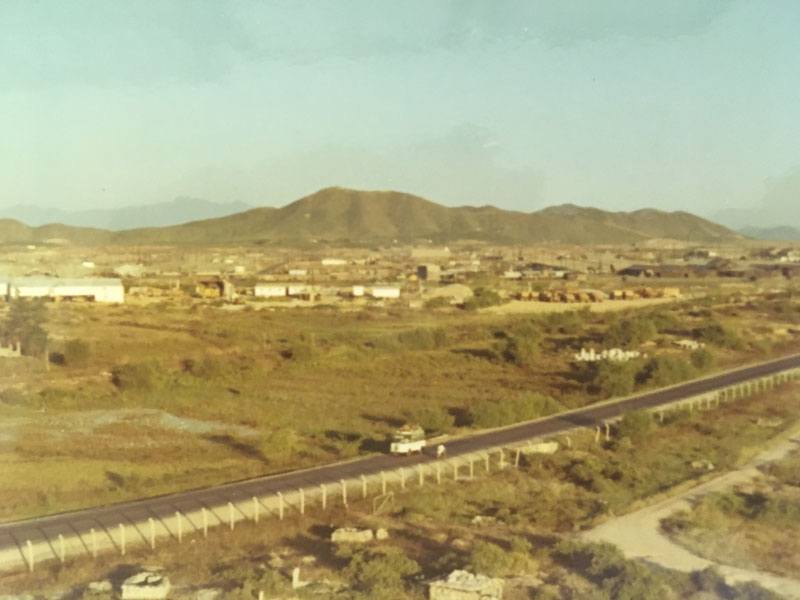 His photograph stands framed on the nightstand next to my [...]

I feel the rush like everyone else when the singer [...]

Recent tension between the US and Iran have renewed debate [...]

Get my latest blog posts in your Inbox and be the first to know the dates of upcoming events.

Sign up to be notified when my book is ready to purchase!

I’ll send you a message with a link where you can go to purchase it as soon as it’s ready!